The Long-Lost Art of Recording a Live Backing Track

The guys from Black Tree Vultures came in for a recording session at Outhouse Studios last week, and wanted to record their session live. My heart sank because quite often when a band wants to do this, the drummer often isn't tight enough for the job. After flagging this concern with them, they reassured me that they’d been rehearsing a lot and were fit for the task. So we went for it!

I mic'd up the drum kit in my usual fashion, took a DI from the bass player's Orange Terror Bass head, and put my trusty Marshall 4x12 cabinet at the end of the corridor by the back wall of the studio. Anyone who has been to Outhouse before will be aware that it's a compact and bijou setup, and not necessarily the most ideal setting for a live recording. Regardless, I put the guitarist's Mesa Boogie amplifier in the control room and ran a speaker cable through the door and into my cabinet at the end of the corridor and cranked it up to an earth-shattering level (much to the neighbours' chagrin, probably). We then got levels on the desk, I set up a project, gave the drummer my iPhone so he could control his headphone mix using the Focusrite Control app, and I hit 'record'.

Wow!!! Cynical as I may seem, but in this day and age, rarely does one find a band that is capable of putting down a live backing track that doesn't need some level of doctoring afterwards. But they nailed it! We did three takes of each song, played them back, and chose the ones that had the best feel. There was no nudging or tweaking of any sort. The only thing that we did was double-track the rhythm guitar so that there was an added element of stereo. 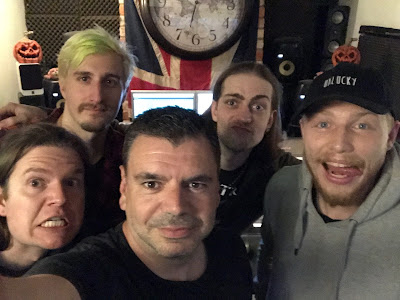 I have to say, it's probably been in the region of 15 years since this last occurred at Outhouse Studios, and it was a revelation and pleasure to record something in the manner that it would have been done in the 1970s. I heard a rumour that Black Sabbath recorded their first album in two days, and I was always sceptical that this was possible. However, Black Tree Vultures have restored my faith in this somewhat neglected art form. Beat Detective, take the rest of the week off!